What Makes a Riflescope Tick? 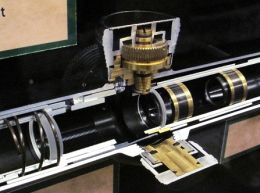 Optical rifle sights like scopes have been around by the 1840s. In fact, the first practical optical rifle sight was invented by a competitive rifle shooter named Morgan James, who described a scope and mount of his own design in the 1844 book, The Improved American Rifle. By the 1860s, scopes had become accurate enough for Union Colonel Hiram Berdan’s Sharpshooters to make use of scope-sighted rifles against Confederate officers and artillery crews from comparatively long distances.

These early scopes lacked quite a bit in optical quality and durability, though, and were regarded with suspicion until the 1950s. In 1958, Roy Weatherby was considered certifiably crazy when he introduced his Mark V rifle without iron sights, but history has proven Weatherby correct since we now use glass sights almost to the exclusion of iron.

Progress in the optics industry moves quickly now, and today’s medium-priced scope is probably better than a high-priced scope from the 20th Century. For that matter, some of today’s budget scopes are worlds apart from the medium-priced models of 15 years ago. What exactly makes a scope tick, though, and what’s inside these wondrous inventions that allow us to take precise aim on a prairie dog from 300 yards away?

The exterior of the scope

We’ll start from the outside and work our way in. The riflescopes of today are drawn from aircraft-grade aluminum, which is very strong and much lighter than the steel used for yesterday’s tubes. In America, these tubes are typically one inch in diameter, while European tubes are usually 30mm in diameter.

You can find out more about eye relief in our glossary, but basically it’s the distance between the ocular lens bell and your eye. If you don’t have enough of it, you’re gonna get hurt because the bell is going to crack you in the eye or forehead. For a hunting rifle’s scope, you should look for eye relief of at least 3 inches, with 3.5 inches being far better. If your gun kicks like a mule, look for something with at least 4 inches of eye relief, or make sure you have good health insurance for those trips to the ER for stitches.

All scopes have lateral (windage) and elevation (up and down) adjustments, used for sighting in the scope. These adjustments are controlled by dials or knobs located on the adjustment turret, which should be located midway down the tube. You’ll find the elevation dial at 12 o’clock on the tube, and the windage knob at 3 o’clock. These dials use a system of small, fragile parts to shift the position of your reticle, which in turn moves the point of impact for your bullet or bolt.

Some scopes will also have a focus wheel for the reticle as well as a zoom wheel, which allows you to change the magnification of the scope.

Now, we’ll move inside the scope and look at the parts that make the scope bring your target image to you and aim accurately at it.

In the 1960s, Leupold developed the Duplex crosshair, which has become the standard reticule, or reticle, ever since. Originally, a reticule was made by placing two hairs perpendicular to one another with an intersection at the middle. Hence the name “crosshair.” Today, reticles are etched or painted, and there are a wide variety of them to choose from. Few, if any, still use hairs, but the name crosshair has stuck for what will probably be the entire future of scopes.

Some reticules include LED lights to illuminate them, which can help improve aiming speed, especially in low light conditions. There are also a wide variety of range-compensating reticles to choose from. For more information on reticles and how to choose the right reticle for your use, see our article explaining the subject.

Magnification makes the target look closer than it is, and aids you in properly placing your shot in the spot that will most ensure a clean and humane kill. While fixed-power scopes have historically been more popular than variable-power models, that is changing. Variable-power scopes are very useful on the hunt, because they offer you a degree of flexibility that you simply cannot achieve from a fixed-power scope. That doesn’t mean, though, buying the highest power scope you can find. Here’s a rough outline of the power ranges that work best for different types of hunting.

That’s it, that’s what you’d find inside your scope if you cut it open. Now that you have a better idea of how a riflescope or crossbow scope functions, start researching your next glass purchase by reading our reviews. Happy hunting!