How To Record Your Hunt Using a GoPro Camera? 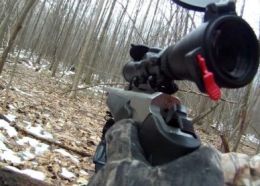 You’ve seen those great YouTube videos of people hunting, and you think it would be great to do the same thing, right? Unfortunately, you don’t even know where to start. That’s where we come in, since we’ve seen it all and done most of it. Using the GoPro camera, you can create awesome videos of your hunt, and share those with your friends, family, and the rest of the YouTube community. Let’s take a look at how to do it right.

The first step is to make sure you have the right GoPro camera. This is a matter of personal preference, and it’s probably your biggest investment. What really matters the most in the camera is how well it’s going to shoot and how rugged it’ll be. Your best option is going to be the Hero3+ or Hero4 Silver, but I’d go with the Hero4 Silver. It’s got a much more enhanced camera sensor, and shoots video that is leaps and bounds above the quality of its predecessor, the Hero3+.

Get up close and personal

For my money, nothing beats the footage of my GoPro Hero4 Silver when I shoot in 1080p with the Ultra-Wide view setting. I can get decent enough footage with the Narrow or Medium views, but Ultra-Wide really captures the moment. What this means, though, is that you need to really get up close and personal on the animals. If you place the camera at a distance that you think is comfortable, then cut that distance in half, you’re about close enough for a good footage. Sometimes this means mounting the camera to a tree near where you’re trying to lure the animals to, but that’s the beauty of the GoPro Hero4 Silver: you can control it using Bluetooth from your smartphone!

It’s all about the mount

The last thing you want is for your camera to fall or get knocked off of what you’re mounting it to. There are a ton of different mounts out there, but my absolute favorite is the Sportsman Mount. This thing can stand up to just about any field conditions, and you can clamp it down on almost anything you can think of. I’ve clamped my GoPro to a shotgun barrel, the handrail of my treestand, the stabilizer of my bow, and even a low-hanging branch near where I had my decoy turkeys. The screw-to-tighten clamp is heavy-duty, and simply won’t come loose until you tell it to.

Make sure you have the Blackout Housing for your GoPro camera. Normally, the Hero4 Silver has two lights that blink and flash while you’re recording. This is awesome for letting you know that the camera is rolling, but it really sucks in a hunting situation. Blinking and flashing lights are sure to scare off your prey, which is the opposite of what you want. The Blackout housing covers up these lights, along with the silver body of the camera, so you don’t have to worry about the GoPro scaring off the animals.

The GoPro Hero4 Silver has the best low-light settings of any of the GoPro product range, but I’m still a fan of shooting when the light is good. Early in the morning or late in the evening, the footage can look a bit washed out, even with the better low-light settings in the camera. Obviously, you should shoot your footage when the action is happening, but if you can wait until good sunlight to get those awesomely detailed videos, do it.

Think about audio, too

The GoPro Hero4 Silver comes with a waterproof housing, that lets the camera get submerged up to 131 feet without a problem. Many people go ahead and use it, but that housing makes it very difficult to get good audio. The camera itself is already waterproof, to an extent, so unless you’re spearfishing you probably don’t need the waterproof housing. Go with the back plate with slits in it if you want to capture the turkeys gobbling, moose bellowing, or elks bugling. Even a steady rain won’t do any damage to your camera.

There you go, six tips to help you make the most out of your GoPro camera when you’re out hunting. It’s an investment, but so is hunting itself. Who knows, if your videos become popular enough, they could start earning some of that money back for you.